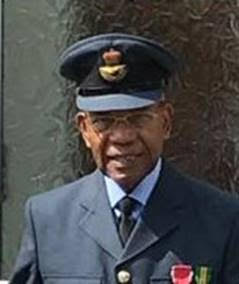 Our Windrush Day 2020 event with the remarkable Mr Sidney McFarlane MBE is taking place on 22 June 2020. Not only is he a Windrush adventurer, but he also served in the Royal Air Force for 30 years, and the Ministry of Defence for 12 years. He has worked in criminal justice, as an entrepreneur, as a community philanthropist. As if that was not enough, much to the benefit and fortune of the CPS, he was also a member of the CPS East Midlands Hate Crime Scrutiny Panel.

He personifies the period of incredible living history that we are living through.

We recently celebrated the 75th anniversary of VE day in May and on June 22; we will mark the National Windrush Day 2020.

Both of these celebrations have filled me with an incredible sense of awe and pride.

In the West Indies, thousands of men joined the local home guard and the British Army. They were eventually sent to Europe for training, but few were allowed to fight on the front line. Approximately 5,500 West Indian RAF personnel came to Britain between 1944 and 1945. From 1944, West Indian women served in the Women’s Auxiliary Air Force (WAAF) and the Auxiliary Territorial Service (ATS) in Britain. These contributions by the thousands of men and women from Caribbean colonies during World War Two have to often been overlooked and forgotten.

After World War Two, Britain was a country short of workers and needed to rebuild its weakened economy. There were thousands of men and women who came to Britain from the Caribbean to work in sectors which included manufacturing and public transport. There was also a need to staff the new National Health Service.

The media and popular culture always equate the West Indies with images of the sun, sea beaches, coconuts and Rastafarians.

My sense of awe does not come from these cheap and condescending tropes. It comes from my marvel at the strength and resilience of these peoples. For hundreds of years up until today, they have been on the receiving end of the most immoral and evil of human behaviour. They survived the slave trade. They survived travelling to the UK despite the hostility directed at them and present they are surviving the spitefulness of the Windrush scandal.

They personify the human spirit of strength and resilience. They have survived extraordinarily traumatic events which led to rebirth, recovery and rebuilding. They have brought to the UK, an abundance of beauty, arts and culture which has undeniably changed the UK forever.

We hope that you will join us on 22 June to honour this great man and learn from his experiences of public service and hopefully gain a greater understanding as to how we too can make a difference through public service.